Joachim Seinfeld graduated from the Academy of Fine Arts in Florence, Italy with a degree in painting. At the beginning of the 90s he started combining painting and photography by applying photographic emulsions to his pictures. Since then the use of silver gelatin emulsion is characteristic for his work. Since the early 1990s Seinfeld has participated in numerous exhibitions in Germany, Netherlands, Denmark, Italy, Poland, Czech Republic, Slovenia, Turkey, USA and other countries. He took part in the International Biennial of Contemporary Art at the National Gallery in Prague and the exhibition 4 KS 2/63 – 40 Years of Auschwitz Trial at the Martin-Gropius-Museum in Berlin. He has received numerous awards including the Heinrich Heine prize of the city of Augsburg (1994). He has performed and lectured all over Europe including the Zacheta National Gallery Warsaw, the Jagiellonian University in Krakow, Trafo Gallery, Budapest, Tacheles, Berlin and Académie Royale des Beaux Arts, Liège, Belgium.  His Golem pictures were used for the New English edition of the Golem by G. Meyrink at Tartarus Press.

The backgrounds used in these works originate from walls of demolished or restored buildings. With the aid of a special procedure, the original layers of paint are removed from the walls and fixed to a new support, whereby a silver gelatine photograph is developed upon them. The photographs for this series date from the time of the making of the houses and wall paintings.

Hypothetic former inhabitants of the apartments where the paintings have been removed move like ghostly figures through the images. The question that arises is what might have become of these people, who else lived in the houses we live in now and how we deal with these shadows of the past in our dwellings. In a town like Berlin where part of the population has been deported, others killed during the war and where people are driven out of the apartments they lived in for years because of the historical changes or due to what generally is called gentrification, these questions are of a non-neglectable relevance. 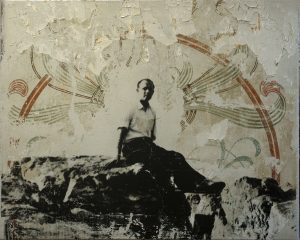 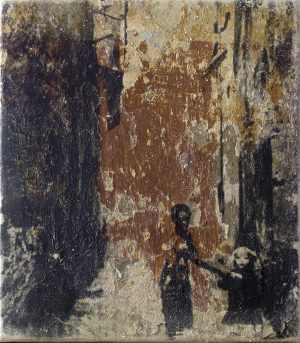 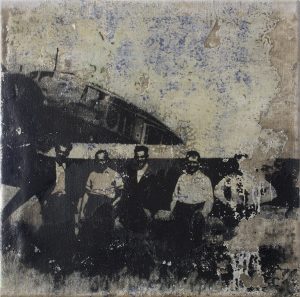