In today’s world, our understanding of the brain is described in terms of the functions of a computer: a hard drive, or perhaps the motherboard, is an analogy for long-term memory. Short-term memory becomes RAM, memories are “archived” and “saved”. Technology seeks to emulate the body which we can never fully comprehend – in contrast to technology itself, which we understand down to every last component

The same applies to perception. To borrow a metaphor from modern communication, perception is equipped with an auto-correct function. Experience from sensory perception, data from our long-term memory and input from the here and now are combined in a process of constant comparison against reality

Every gap, every “blank spot”, every surplus or deficit, every non-visible element arising from the format of representation is auto-corrected. Perception is corrected into a coherent whole on the basis of memories, assumptions and experience.
This process produces images, sounds, smells and touches which continuously and consistently blend into the wider picture.

Gaps and non-visible elements are an intrinsic part of Jorge DaCruz’s images and representations. “Blank spots” are assimilated into the creative process. His images are not first and foremost a whole to be analysed and sequenced. They are made up of four or six parts, which only come together as a single entity in the perception of each individual viewer. DaCruz himself must assemble the fragments of his creations like the pieces of a puzzle. From memory. Through the experience of creation. A pixel-by-pixel process. This technique is not new to the artist’s work. The concept of remix is a central theme. Jorge DaCruz’s art focuses on the novelty which arises from the randomness of juxtaposition. The interchangeability of the image’s elements becomes a condition of their continued existence.

The use of new media is a decisive part of the creative process. By projecting a depiction of an existing landscape onto recycled paper, the artist creates a representation – his representation – of the landscape. With charcoal and paper, each pixel is painstakingly stored, each speck of charcoal is assimilated into the overall picture. The paper determines the size of a section of the landscape, which is itself a section of reality projected onto itself. Each pixel is re-projected, its existence gaining a new purpose on paper. They form a landscape expressed in the viewer’s memory as a representation of the depiction using charcoal and chalk.

The empty spaces in the pictures, determined by the format, open the doors to individual perception. Disorientation caused by these “blank spots” becomes lodged in the memory, increasing the processor’s performance. This performance is boosted further by the black and white look of the landscapes re-presented in DaCruz’s work. Announcing the landscape’s presence. Heightening perception. A distinctive feature of this technique is that the wider picture is not apparent until seen from a distance. The details, the pixels, painstakingly assembled, reveal their full meaning only when they lose their identity, seen from afar.
DaCruz’s images – which never simply stand alone, but follow a particular theme – combine perception, memory and projection, harmoniously bringing together the details, the whole and its parts. The images’ story is told by the imagination.

objects and moons – dark side of our moon – south hemisphere 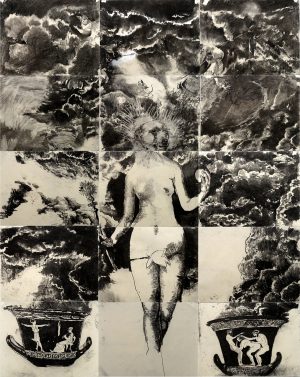 The Great Arrival or The World Creation – Passive Aggressive 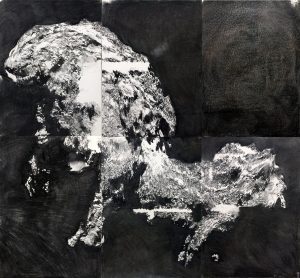 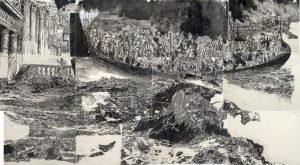 The Great Arrival or The World Creation – The Journey 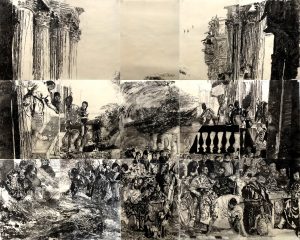 The Great Arrival or The World Creation – The Arrival,