The origin of my graphic art and the concept behind it stems from my personal interests. I draw inspiration from news and the media world, reworking them in my own way. In the face of global problems, threats and conflicts I want to address issues that I consider important. I create a specific space to express my fears, fascinations and interests, and then provoke and determine the form of my visual response.
The vision of my prints is intended to express the global problems of identifying war with games and play, resulting in illusory isolation of an individual from. I want to show the danger of reality that is described as games and play. These issues are extremely important in the face of an increasing number of hot spots that shape the image of the postmodern world. I want to draw attention to the atrocities of global problems and the ongoing blurring of the boundaries between the real and the virtual world.
The form of my works refer to the phenomenon of the non-reality defining the war, a metaphorical battlefield, simulated space set in contemporary times. The austere style I use is inspired by digital image creation and composition, modular systems, the illusion of depth, and location in a fluid and open space. Application of a particular perspective and going beyond the sheet of paper create an impression typical of multimedia-based activities with their unlimited possibilities of image creation. I wanted to show intaglio techniques, known for hundreds of years, in a whole new light, with a full range of new possibilities and complete awareness of the medium. Using digital framing, schemes and compositions I transfer the staged and generated images of war into the large-format compound print. Its ambiguity touches upon the unreal images of strategy video games and board games, a sort of topography of war, or innocent child’s play with toy soldiers, gives a view of real and at the same fictional battlefields. 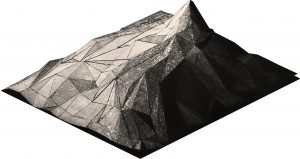 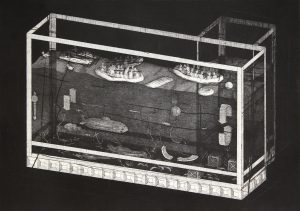 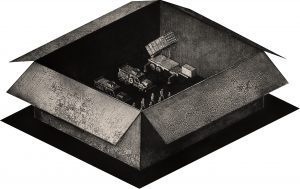 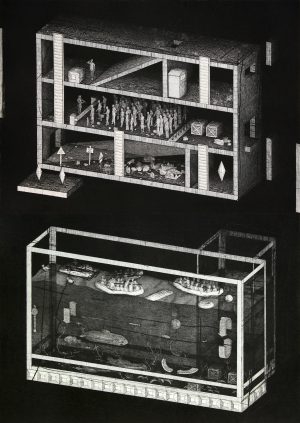