After my painting studies at the Hungarian University of Fine Art I came to Leipzig to start my master’s degree in media art at the Academy of Visual Arts in the class of Professor Alba D’Urbano. I work as a freelance artist since 2014.
On one hand I am committed to the profession of painting, since it has its own, unique ways of expression. On the other hand I have always been interested and worked with other media. Often what interests and inspires me is the translation process and transformations of an idea into different medium. In the following I will describe three artworks of mine:
Ephemeral sculpture installations: The aim was to accumulate variable contemporary events that are happening in the world –
such as the Israeli / Palestinian war or the Russian / Ukrainian conflict; historical and biblical scenes; and private stories. I wanted to create a „landscape” similar to the paintings of Hieronymus Bosch or Pieter Bruegel, an apocalyptic turmoil, where parallel stories are told, mighty and banal at the same time. A place where Super Marios, scenes taken from Caravaggio’s paintings, Barbie and Ken dolls, octopuses and other objects can meet. An installation in which the different and simultaneously running stories cannot be taken in, all at once by the viewer.
Later I became interested in transforming the static, rigid clay figures into moving images through the medium of film. I started making stop motion animations in 2016. My first project was – Scenes from a marriage, a remake of Ingmar Bergman‘s classic. I was interested whether the clay figures can transport or even add on to the brutality of the scene I chose. My second project was a surrealist short film. The setting of this film was a clay palm tree, a silver ceramic skull and a black shiny foil with stars painted on it. I was so impressed by the materiality of the objects and the colours that I decided to transform the scene into a painting that I later named San Junipero. This painting submerged my surrealistic fascination with technology, entertainment and advertising.
My main theme is the contrast between latest improvements of technology and timeless existential problems of humanity. I am interested to see the paradox of a Korean cartoon robot, an army jet plane, artefacts of consumerism made to look ancient and Stone Age by the materiality of clay. In this expression the non contemporary can occur simultaneously with the contemporary. 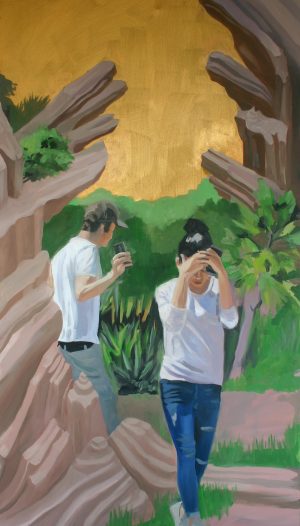 A dirty animal of the past 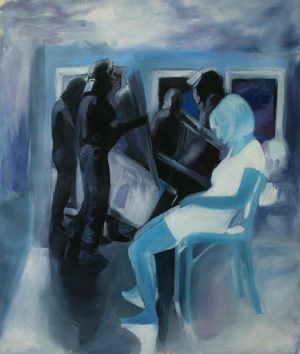